The film, not the holiday 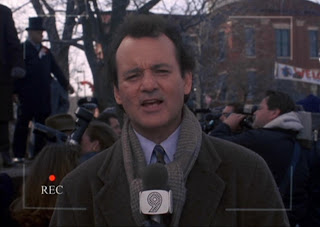 From the first time I watched it when it hit the theaters back in '93, Groundhog Day has held a special place in my mind. It isn't that it's based on a clever idea (Bill Murray stuck in a time warp forced to relive one of America's silliest holidays over and over). Lots of movies have clever ideas. It isn't even that it executes this idea flawlessly from start to finish--which is almost unheard of for a high-concept comedy. It's that it does all that, and then manages to tell a smart, perceptive tale about the human condition.

It's one of those movies where you're not even sure the filmmakers understood how good it was, because it has the trappings of a more frivolous endeavor. It belongs to a tradition of farces I call Cursed Schlub movies, which revolve around a character who becomes victim to some otherworldly fate with its own bizarre rules. Examples include The Nutty Professor, All of Me, Liar Liar, and Shallow Hal. Typically they're not much more than comic exercises, with plots that function as clotheslines for a string of elaborate gags.

While just as funny as the best of those pictures, Groundhog Day transcends the genre, fleshing out the story and supplying character development that doesn't feel the least bit contrived. It was something of a transitional role for Murray, who up to that point had been known merely as a brilliant comedian. His performance, where he uses subtle facial mannerisms to great effect, paved the road for his more serious turn in movies like Rushmore and Lost in Translation. 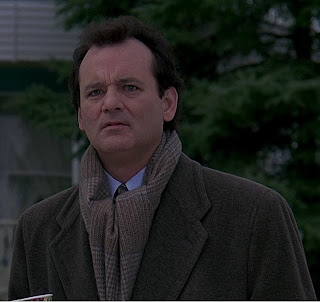 Even its style of humor is uncommon for this type of film. It mostly avoids slapstick in favor of witty dialogue that showcases Murray's gift for understatement, as when he laconically remarks, "My years are not advancing as fast as you might think." Not only does his deadpanning make it easier for us to believe in the character of Phil, it enhances the laughs. (Part of the hilarity of the early scenes comes from seeing the mounting panic on a man who keeps his emotions so tightly bottled up.) I have my doubts that a broader approach, like one Jim Carrey might have given, would have worked as well on any level.

The film also wisely never reveals the cause of the time loop. It's customary in Cursed Schlub movies to invent some harebrained rationale for the central plot device (the birthday wish in Liar Liar, the hypnotic suggestion in Shallow Hal, the cartoon mysticism in countless body-swap comedies). An early version of the script did just that, explaining Phil's predicament as--I kid you not--a voodoo spell cast by a former lover. Viewers tend to assume it is something more along the lines of a trial from God, and the movie acquires a certain poetic and even spiritual quality normally absent from this sort of material.

Its biggest divergence from other movies in the genre lies in its plot construction. Instead of the usual strategy of cobbling together a series of comic sketches and gluing on a formula ending, the plot develops as the step-by-step process by which Phil comes to terms with his strange condition. There's a surprisingly smooth progression to the story that never gets thrown off course by the jokes. In the entire movie only the Jeopardy scene feels like a skit that could have appeared just about anywhere in the proceedings (though its placement in the section where Phil becomes lethargic and depressed makes sense). The rest of the time the events fit together like clockwork, the end flowing naturally from the beginning, all of it focused on Phil's growth as a person. Along the way, it does a splendid job exploring a universal human trait.

Everyone on the planet, I'm convinced, sometimes imagines redoing past experiences. This can range from thinking up a snappy retort hours after an argument ended to harboring deep regrets over a life decision. Yet if you were somehow given the ability to go back in time and alter past events until you got them exactly as you wanted, you'd eventually go mad, because you'd be depriving yourself of the unpredictability that makes life worthwhile.

That's one of the movie's insights. I think of the sequence where Phil uses trial-and-error to determine Rita's likes and dislikes so that after she's forgotten divulging all that information he'll present himself to her as Mr. Right. From his perspective the project could be taking weeks or months or longer (the movie never says), but to her it's always their first date, and he is never able to seduce her on what to him is a day with no end. She always feels he is pushing too hard on their relationship, and even though she doesn't know the supernatural part, she senses he's manipulating the situation and concealing his true self from her.

In one crucial bit of dialogue after he thinks he has gotten through with her, she tells him, "It's a perfect day. You couldn't plan a day like this." He replies, "Well, you can. It just takes an awful lot of work"--once again making an honest observation secure in the knowledge she won't possibly take it literally. Yet one of their most romantic moments, where they fall on the snow together, is unplanned. We see that he is unable to repeat that moment in later iterations of Groundhog Day: his words get increasingly stilted, his movements increasingly clumsy. Even for a man given thousands of do-overs, the moment is gone forever, and only he will remember it. Our lives are filled with moments like that, but some of us lose sight of their significance when we're overwhelmed by the things we almost got right. 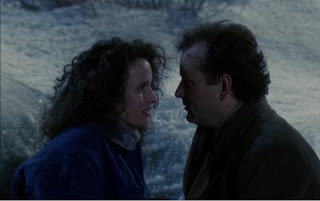