Sometimes movies that don't work are more interesting than those that do. One example that comes to mind is Just Cause (1995), which seemed to draw upon public feelings generated by the contemporaneous O.J. trial, as well as by the earlier Rodney King controversy. The movie is a mess, with a ludicrous ending that leaves the impression that the film supports, or at least condones, police brutality. And yet, the movie got me thinking about this issue in a way that has stayed with me far longer than many better films.

In the opening scenes, police detain a black man (Blair Underwood) in an interrogation room. There, they beat him until he confesses to the rape and murder of a little girl in the Everglades. The arresting officer is white, but the sheriff (Laurence Fishburne) is black.

In the next scene, several years have passed, and a Harvard law professor (Sean Connery) is railing against the death penalty at a public debate. He is called in to defend Underwood, who faces execution. His conversations with the charming, intelligent prisoner lead him to talk to another death row convict (Ed Harris, trying a little too hard to channel Anthony Hopkins in Silence of the Lambs) who, after some wrangling, takes responsibility for the murder and correctly reveals the location of the murder weapon, which Connery finds in the swamp. A new trial is granted, and Underwood is freed.

Connery discovers, too late, that Underwood really did commit the murder. He persuaded the already condemned Harris to make a false confession. In return, he offered to kill Harris's parents--which Harris wanted--once he was released.

It is at this point that the movie takes its leaping nosedive down the rabbit hole. What Underwood does next is what any newly acquitted killer would do: go after the family of the man who got him acquitted. We learn that Connery's wife was the prosecutor in an earlier trial when Underwood got castrated in jail, and he has plotted his revenge ever since. (Uh, huh.) He kidnaps Connery's young daughter and takes her to the Everglades. Connery and Fishburne confront him, where he is finally devoured by an alligator.

The movie seems to suggest that the police were right to beat a confession out of Underwood, since otherwise a horrible killer would have been let loose. As Fishburne explains earlier in the film, sometime before it jumps the alligator, "This is a case that hangs together by the thinnest of threads.... You come down here, you start pickin' at them threads now, it's liable to fall apart." Because Connery sticks his liberal nose into the cops' business, he ends up freeing a monster who then comes after him--poetic justice. The message is straight from the annals of Willie Horton: If you dare to fight for such radical notions as civil liberties and due process, a black man will come and rape your daughter. 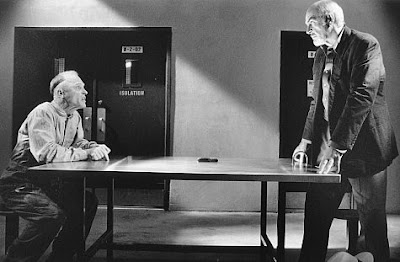 As it stands, Just Cause falls into a long tradition of Hollywood movies stretching back to Dirty Harry and beyond, which show no respect for the legal and constitutional protections on criminal suspects. The attitude of these films is that you do what you gotta do to keep dangerous criminals off the street, even if it means breaking the law yourself. Never do these films stop to consider that these protections do far more to prevent the U.S. from becoming a draconian police state than they do to instigate the contrived, paranoid scenarios these films cook up.

I am not naive about crime in America. I grew up and still live in Baltimore, which has the second-highest homicide rate in the country. I've been a civilian patrol volunteer for the last ten years. I know firsthand how weak and ineffectual the police force and justice system around here usually are. But I have seen nothing to convince me that beating up suspects will make the world safer.

You can't have it both ways. If cops get to railroad a case whenever they're convinced a suspect is guilty, it will greatly increase the chances that innocent people will be framed--and abused. Is that worth the cost of making sure guilty people always get brought to justice?

The way people answer that question often falls on racial lines, because it's a matter of what people fear the most. Both whites and blacks are scared of street crime. But blacks also carry a fear of police brutality and discrimination that many whites fail to understand, because it is not something whites normally experience.

That's why most whites are perplexed by black people's unwillingness to acknowledge O.J. Simpson's obvious guilt. Because frame-ups have been a reality to blacks for so long, many of them simply do not trust our justice system. Once they hear that an investigator to the case once used the term "nigger," that is enough to throw the entire investigation into doubt.

This reaction is not logical. But neither is the perspective of whites who take comfort at the thought of police violating a suspect's civil rights. They aren't afraid they'll ever be that suspect; they're afraid of what the suspect will do to them if he gets set free--an outcome that, in fact, may directly result from such violations. In other words, both sides to this debate are capable of being irrational, and for the same reason: because they cannot argue with fear.