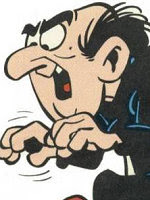 Last month HuffPost ran an article about a newly published book by a French author which argues that the original Smurf cartoons were works of racist, anti-Semitic, and socialist propaganda. A few weeks later, an article in The Forward elaborated on this theory without mentioning either the HuffPost article or the French book. According to this theory, Gargamel looks like an anti-Semitic caricature of a Jew, down to his hooked nose, and this suspicion is heightened by the fact that the goal of his nefarious plans is money. As the Forward article puts it, "All that Gargamel lacks is a yarmulke."

This theory isn't new. Back in 2007, JewOrNotJew.com did a half-joking piece on the matter, concluding that "someone out there is really bigoted--the creator of the cartoon or the creator of the theory. Probably a little of both really." I myself never noticed any of this as a kid, apart from wondering why Gargamel's cat, Azrael, had a Hebrew name.

I believe it is within the realm of possibility that the Smurfs' creator Peyo could have been an anti-Semite. But I'm hesitant to endorse this theory, not because it will spoil my childhood, but because it's all speculative. I know nothing about Peyo's life, and he isn't around to defend himself against these charges. (A son of his, however, has dismissed the accusations as "between the grotesque and the not serious.") None of the articles I've seen have provided any new information, just interpretations of what I already know.

Actually, let me qualify that a little. The HuffPost article did mention one fact that I admit was pretty damning with regard to another prejudice. Apparently the very first Smurf cartoon was called "The Black Smurf" and was about a disease that turns smurfs black, where they become dimwitted and say "nyap nyap." US publishers refused to print this cartoon, and later they made the infected smurfs purple. (I remember reading a strip concerning a green smurf that bites other smurfs to turn them green--but my memory could be failing me as to the exact color. I just assumed it was the smurf equivalent of vampires or zombies.) That does sound racist, and quite similar to things on our side of the pond from Disney and Warner Bros. (many of which, such as the black centaurs in Fantasia, have been censored).

As for Gargamel's alleged Jewishness, I have much the same reaction as JewOrNotJew.com: it makes me uncomfortable, but there's no conclusive evidence to prove this theory correct. Gargamel is never identified as a Jew. He doesn't have a Jewish-sounding name or speak any Yiddish. The evidence, such as it is, apparently escaped the notice of American producers of the Saturday morning cartoons (which I watched as a kid through a VCR, an invention of great use to observant Jews in the '80s). It's also possible that the element of anti-Semitic stereotyping was subconscious, rather than part of an agenda, on Peyo's part.

I'm reminded of when The Phantom Menace came out and some critics suggested that some of the alien creatures were thinly disguised racial and ethnic stereotypes. What provoked the most ire were the inaptly (or ineptly) named Gungans, especially Jar Jar, a flop-eared, blubbering creature whom Newsweek's David Ansen described as "a kind of intergalactic Stepin Fetchit." Getting only slightly less attention were the "Asian" Neimodians and the slaveowner Watto, a winged creature with a hooked beak, a strange accent, and more than a dollop of greed. Slate's Bruce Gottleib reacted indignantly to Richard Corliss's suggestion that Watto's accent was "Turkish":

Turkish? Even without the visual clue of the hooked nose, Watto's accent is clearly Yiddish, not Turkish. Or click "No"; listen again; and you tell me: Is Corliss crazy or am I?

Personally I don't think either writer is crazy, but I didn't pick up what Gottlieb was hearing in Watto's voice, even after downloading that sound clip. I'm no expert on Turkish accents, but Watto's accent did not strike me as Yiddish. And I should know, given that my maternal grandfather had one. 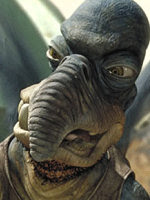 Part of the problem is that Lucas made a choice in the prequels to have some of his aliens speak English in made-up accents, rather than totally made-up languages like in the original trilogy. This wasn't a bad idea in the abstract. In an intergalactic society, I imagine there would be diverse accents and not just diverse languages. But I think that whenever people hear an accent they can't immediately identify, their instinct is to compare it to accents they know. JewOrNotJew.com dismisses the theory about Watto before you can say "smurfin' awesome":

If a character is designated as Jewish and is portrayed as loving money, having a big nose, being henpecked by women, whatever, that's a negative Jewish stereotype and the creator should be called to task.

But if a character has a big nose and loves money and the anti-defamation league or whoever says that makes him/her Jewish, well, that's not the creator of the character spreading negative stereotypes. That's the Jews themselves.

But then why did this same site suggest that Gargamel is "probably" the creation of a bigot? He has a big nose and loves money and is no more identified as a Jew than Watto is. Is it because Gargamel is a human on Earth while Watto is an alien in a galaxy far, far away? Or is it because whoever runs this site has a harder time ascribing anti-Semitic motives to George Lucas than to a mid-20th-century Belgian whose life story isn't well-known?

That's part of the way I look at it, I admit. I highly doubt Lucas is consciously racist or anti-Semitic. I think it's possible the echo of ethnic stereotypes could find its way into Star Wars, a potpourri of myths, legends, and old movies. There are elements of it in the original trilogy, though mostly too vague to seem offensive: Yoda seems modeled on an Asian master, the ewoks are rather like a stereotypical African or Amazonian tribe, and the Tusken Raiders bear a clear imprint of desert nomads on earth such as Bedouins. I'm sure Lucas would be the first to admit all this. But he has consistently gotten defensive at any suggestion of racial insensitivity on his part. He did so when the 1977 film came out and some critics complained about the all-white cast (except for James Earl Jones as the voice of Vader). He did so when critics of The Phantom Menace complained about Jar Jar and co.

While I'm not ready to let Lucas totally off the hook about Jar Jar, I never noticed the stuff about Watto until others pointed it out. And I ought to have enough Jewdar to pick it up, if it was there. I don't hope to convince anyone who did see it, however. There's a heavy amount of subjectivity in these interpretations, and yet you can't totally dismiss the idea of veiled racism in a children's fantasy, because it's a fact that there's a long tradition of it. All I can do is try to distinguish those who have ill intent from those who stumble into these images by accident.
Posted by Kylopod at 10:00 AM No comments: