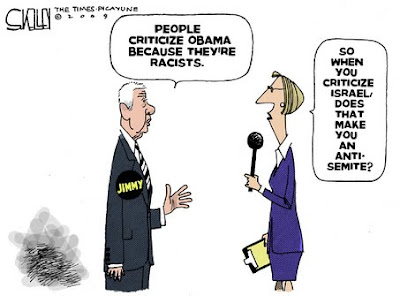 Jimmy Carter has helped highlight some intriguing parallels between Israel-bashing and Obama-bashing. He stated recently that "an overwhelming portion of the intensely demonstrated animosity" toward President Obama is fueled by racism. Israel supporters have long made a similar argument about anti-Semitism in the type of Israel-bashing that, ironically, Carter has engaged in. For their part, Israel-bashers and Obama-bashers both like to invoke the straw-man argument that the bigotry charge is being used against all criticism of the subject in question.

Soon after the release of his book Palestine: Peace, Not Apartheid, Carter asserted, "There is no debate in America about anything that would be critical of Israel." Of course that statement is demonstrably false, as a glance at the editorial page of any standard newspaper will reveal. Indeed, Carter's own critical pieces on Israel have been carried by major papers both before and after the publication of his controversial book.

That's where the straw man comes in: following some inflammatory, over-the-top attack on Israel, the bashers insist they're being vilified simply because they had the temerity to "criticize" the Israeli government, as if calling Israel an apartheid state falls in the same category as complaining about its bus routes.

It would be one thing if these commentators argued simply that there isn't enough debate about Israel, and that certain criticisms are unfairly labeled as anti-Semitic. Instead, they make the extraordinary claim that all criticism of Israel is treated this way. This claim has been repeated so many times it has become a sort of mantra in anti-Israel circles, despite the fact that it crumbles under the slightest scrutiny.

What's striking is that virtually no one fits this description. Every U.S. president in the last four decades has attacked the building of Israeli settlements in the territories--the mainstream position in American discourse. Even the most fervent right-wing Zionists criticize Israel all the time, as their bitter reaction to the 2005 pullout from Gaza amply demonstrated. While there is basis for saying that many on the right are too quick to apply the "anti-Semite" label to people who deviate from the Likud party line, the mainstream in this country doesn't act that way, and even the rightists aren't vilifying all "criticism" of the Jewish state.

Most Israel supporters agree that there are certain types of assertions that cross the line from legitimate criticism to veiled anti-Semitism. Where that line falls exactly is a matter of debate. Irwin Cotler, commenting on the 2001 Durban conference, gives several examples of such assertions. These include calling for the destruction of Israel, attacking the legitimacy of the Jewish state, depicting Israel as the prime source of the world's evils, comparing the Israeli government with the Nazis, and singling out Israel for condemnation while ignoring or downplaying comparable or worse happenings in other countries. As Cotler observes,

For example - and apart from Durban - in December 2001, the contracting parties of the Geneva Convention convened for the first time to criticize Israel. This was the only time in 52 years that any nation was indicted. Similarly the UN Commission on Human Rights has singled out Israel for discriminatory indictment while granting the real human rights violators exculpatory immunity.

None of this is intended to suggest that Israel is above the law or is not accountable for any violations of international human rights and humanitarian law like any other state. Quite the contrary. But the problem is not that anyone should seek that Israel be above the law, but that Israel is being systematically denied equality before the law.

Convincing the average American that these sorts of criticisms are not merely unfair, but indicative of anti-Semitism, is tricky. It requires some knowledge of history and an understanding that the Israeli-Palestinian crisis has often been framed in a way that encourages Israel's perceived shortcomings to receive attention far out of proportion to their importance in world affairs. Adding to the problem is that Israel, since its inception, has been surrounded by enemy countries whose leaders have often expressed explicitly genocidal wishes against the Jews. The destruction of Israel isn't just a political goal, but a call to mass murder.

What's notable about Israel-bashing is that, unlike ordinary criticisms of a country's sins, it is usually directed, subtly or overtly, at Israel's legitimacy as a country. And since Israel was created as the world's only Jewish state, it is hard not to notice traditional anti-Jewish themes cropping up under the guise of "criticizing" Israel. Carter himself unwittingly proved this point when he claimed that "most of the condemnations of my book came from Jewish-American organizations." Which organizations he had in mind, he did not say. As Deborah Lipstadt noted, most of the strongest public condemnations of his book came from Michael Kinsley, Ethan Bronner, Jeffrey Goldberg, Alan Dershowitz, Dennis Ross, and 14 members of the Carter Center's Board of Councilors who resigned in protest. All are Jewish, but none represent a Jewish organization.

Bill O'Reilly recently lambasted two columns, one by Eugene Robinson and the other by Maureen Dowd, who believe, according to O'Reilly, that "if you criticize somebody [they like] and it's a person of color, then immediately you're a racist." In fact, neither column suggested anything of the kind.

They were both reactions to Joe Wilson (R-SC), who shouted "You lie!" during the President's health care address. Robinson's column discussed at length the open disrespect shown toward the President by Wilson and other Republican Congressmen at the speech before adding, "I suspect that Obama's race leads some of his critics to feel they have permission to deny him the legitimacy, stature and common courtesy that are any president's due. I can't prove this, however." Dowd argued that Wilson's former membership in a neo-Confederate group, his campaign to keep the Confederate Flag flying above the state Capitol, and his dismissing as a "smear" a black woman's truthful claim to be Strom Thurmond's illegitimate daughter, formed an ominous pattern that cast suspicion on his unprecedented departure from accepted standards of decorum in front of the nation's first black president.

That's where the straw man comes in: following some inflammatory, over-the-top attack on Obama, the bashers insist they're being vilified simply because they had the temerity to "criticize" the President, as if shouting him down as a liar while he's speaking falls in the same category as complaining about his tariff policy.

It would be one thing if these right-wingers argued simply that there isn't enough criticism of the President, and that certain criticisms are unfairly labeled as racist. Instead, they make the extraordinary claim that all criticism of Obama is treated this way. This claim has been repeated so many times it has become a sort of mantra in anti-Obama circles, despite the fact that it crumbles under the slightest scrutiny.

What's striking is that virtually no one fits this description. Robinson, Dowd, and even Carter have all criticized Obama before. But you wouldn't know that from reading most of the right-wing sites, which, like O'Reilly, claim that these commentators apply the "racist" label to all who dare say anything negative about The One. A more recent Robinson column explains clearly when he feels attacks on Obama cross the line from legitimate criticism to veiled racism:

Of course it's possible to reject Obama's policies and philosophy without being racist. But there's a particularly nasty edge to the most vitriolic attacks -- a rejection not of Obama's programs but of his legitimacy as president. This denial of legitimacy is more pernicious than the abuse heaped upon George W. Bush by his critics (including me), and I can't find any explanation for it other than race.

I'm not talking about the majority of the citizens who went to town hall meetings to criticize Obama's plans for health-care reform or the majority of the "tea bag" demonstrators who complain that Obama is ushering in an era of big government. Those are, of course, legitimate points of view. Protest is part of our system. It's as American as apple pie.

Of course one may legitimately disagree with Robinson. Obama is hardly the first president to be the subject of vitriolic attacks and kooky conspiracy theories. Robinson's point of contrast is with Bush, but I was thinking about Clinton, whose detractors called him a murderer, a rapist, and a drug addict and likened him to both Hitler and Stalin. On the other hand, no one threatened secession, or said he had a "deep-seated hatred of white people," or accused him of having been born outside the United States. Some of the attacks on Obama seem clearly to have racial (or xenophobic) overtones, but there are those on the left who see a racial motivation in less obvious examples such as Joe Wilson's outburst, which didn't happen when Clinton was in office but conceivably might have. Irrational hostility toward Obama may be rooted in racism, but it also may be rooted in the way Republicans tend to behave while out of power.

Nevertheless, what Israel supporters and Obama supporters are mainly reacting to are the more extreme, inflammatory attacks, particularly those that seek to undermine the legitimacy of Israel as a country, or the legitimacy of Obama as a president. Whether those sorts of attacks are in fact evidence of bigotry can be debated, and depends to some extent on one's understanding of the history of racism in the U.S. or of anti-Semitism in the world at large. But those who do see bigotry in these attacks should at least have their views described accurately rather than caricatured to make them easier to knock down.

(Hat tip to Rabbi Harry Maryles for the cartoon.)
Posted by Kylopod at 2:16 PM 4 comments: