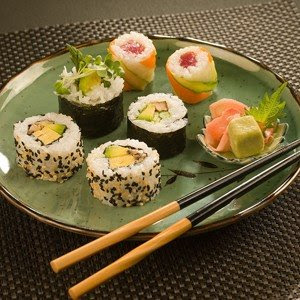 Often when I mention sushi to someone who has never eaten it, I get a response like, "Well, raw fish ain't my cup of tea." It seems that every American who hasn't directly encountered sushi believes it is just another word for raw fish. They hold this belief firmly, like it's a simple fact.

I don't know where this misconception got started, but it's widespread. I myself held it at one time. Snopes even has an entry debunking it. But it takes on an added irony when it comes from people (and Jews in particular) who don't realize they have been eating a type of uncooked fish for years, called lox.

"What?!" they exclaim. "How can lox be raw? Everybody knows it's smoked salmon. Even the dictionary says so."

Okay, now wait a second: do you know what smoking means in this context? It refers to cold smoking, a preservation process that does not expose the fish to heat. Furthermore, not all lox is smoked; it is mainly preserved through curing--soaking in brine (hence the salty flavor).

Like sushi, it is an acquired taste. It's a little weird, actually: eaten by itself, it's borderline unpalatable. Add cream cheese, and it becomes delicious. The raw fish that is found in some sushi has a similar quality.

In the last ten years or so, kosher markets have begun selling sushi. To remain kosher, it must forgo traditional ingredients such as crab. The first sushi I ever ate, I made myself. I was guided through its creation while sitting in a Sukkah, in a program hosted by my college's Hillel during the holiday.

If sushi isn't raw fish, what is it? Usually it consists of rice wrapped in seaweed, with a middle that can contain just about anything--fish generally, but there is also vegetable sushi and fruit sushi. I even once tried chicken sushi, though I didn't think the combination worked.

Snopes defines it as "vinegared rice that can (but need not) be paired with raw seafood." That's also the definition offered by Wikipedia, which then links to the Snopes page. But does it really need to have rice? I once ordered something from a sushi menu, and was given simply a slab of raw tuna on a plate. I say "tuna" because that's what the menu called it, but it didn't look or taste anything like the sort of food you find in a Chicken of the Sea can. It was dark red, with a jello-like consistency, and was about as appetizing as baking soda toothpaste.

I made some a few weeks ago using a kit, the first time I've done it without supervision. The kit provided the seaweed and rice, and I added lox, carrots, cucumbers, and celery. The people I served it to liked it, but it was far from perfect. I put in too much rice, making it hard for me to keep the pieces together. I've asked for tips on Internet forums, and watched what the chefs at local restaurants do. The latest technique I learned is to wet the knife before cutting the rolls.

Let's face it. Sushi is just more fun to make--or to watch being made--than it is to eat. The chefs always remind me of artists, their products more visually dazzling than gustatorily appealing. But you should try it some time, just to say you've had it.
Posted by Kylopod at 10:07 AM No comments: