Sarah Palin has taken no shortage of abuse for her inarticulate remarks last year when she first rose to national prominence as McCain's running mate. Everyone who followed the campaign remembers the notorious moments from the Couric interviews, particularly when she tried to explain why being governor of Alaska enhanced her foreign policy credentials:

Well, it certainly does because our -- our next door neighbors are foreign countries. They're in the state that I am the executive of. And there in Russia ... We have trade missions back and forth. We-- we do-- it's very important when you consider even national security issues with Russia as Putin rears his head and comes into the air space of the United States of America, where-- where do they go? It's Alaska. It's just right over the border. It is-- from Alaska that we send those out to make sure that an eye is being kept on this very powerful nation, Russia, because they are right there. They are right next to-- to our state.

Contrary to popular belief, Palin never said "I can see Russia from my house." That was SNL's parody of a remark she made during an interview with Charlie Gibson for ABC News, when she said, "you can actually see Russia from land here in Alaska." The whole argument about her state's proximity to Russia giving her foreign policy experience started as a bit of campaign bluster by McCain, and she unwisely stuck with it through several interviews.

I believe that ultimately candidates should be judged by the smartest things they have said, not the dumbest things. Our political culture obsesses on these gotcha moments, which can happen to anyone. I know I've made stupid remarks in my life, and been in situations where I've done nothing but sputter. I was just lucky never to be in front of a news camera when it happened.

That's why I decided to ask around the Internet for Palin fans to show me smart, eloquent things she has said on public policy. As it turns out, several users were kind enough to provide me with a series of quotes they believe reveal her penetrating insight. Here is one example, from a November interview with Greta Van Susteren:

Fundamentally, America's economy was built on free market enterprise. It was built on these principles that allowed the private sector to grow and to thrive and prosper and for our families to keep more of what we earn. Where we are right now in America in about the last 11 months is seeing this reversal of those principles that were applied to build up our economy.

All of a sudden, we're thinking it's OK to grow debt in our country. It's OK to borrow money from countries that we will soon be so beholden to. It's OK to print money out of thin air and think, again, that everything's just going to magically work out.

Fundamentally, everybody is equal in America. Everyone has equal opportunity to earn and produce and build. And the fundamentals of a strong economy have got to be applied again, as they were, like I just said, back in the '80s, when Reagan faced a worse recession than what we're facing today. Let's learn from that piece of American history and apply the same solutions.

Okay, where do I begin? Her premise--that the U.S. was a bastion of fiscal restraint until the day Obama took office--is quite sensible to anyone with the political literacy of a third-grade hall monitor, but to few else. Reagan added more money to the national debt than any other president in history, until Dubya shattered the record. (See here for the details.) Furthermore, economists of all political stripes agree that the government should spend during a recession.

As for the claim that everyone in America has equal opportunities for success--well, let's just say if I took the time to refute that assertion with data, it would put me in mind of the proverbial machine gun for killing a fly. Instead, I'll go back to the words of Mr. Reagan himself, in a 1985 address on tax reform:

My goal is an America bursting with opportunity, an America that celebrates freedom every day by giving every citizen an equal chance, an America that is once again the youngest nation on Earth--her spirit unleashed and breaking free.

Notice that he identifies equal opportunity as a goal, not a reality. And he argues that limiting government and stimulating business will help us move toward that goal. That's conservatism in a nutshell. Palin, in contrast, is saying everyone already has equal opportunity. If that's the case, why bother changing anything? Her rhetoric may aim for Ronald Reagan, but it ends up at Stephen Colbert.

But let's put all that aside for the moment and consider her verbal abilities. At least she's worlds more coherent than she was during the Couric interview. Whether she's more eloquent, more facile, more persuasive than the average college term paper is another matter. If I had to grade her, I'd give her a C on style and a D on content. And this is supposedly one of her better moments.

On a similar note, consider the following gem:

Thank you, ladies and gentlemen, for being part of this quest in working with us to restore the American dream. The commonsense Republican proposals are the first step in restoring the American dream because Republicans care about America. But there is no greater dream than the dreams parents have for their children to be happy and to share God's blessings.

That last sentence, I must admit, rings nice on the ears. Unfortunately, I was being a little tricky in leading you to think this was a Sarah Palin quote. It's a real quote, but it wasn't uttered by Sarah Palin. It wasn't even uttered by a human being. 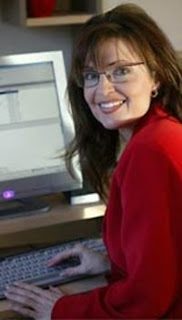 Rather, it came from a computer program that produces automatic summaries of text. In 1996, linguist Geoffrey Nunberg punched in the combined texts of the speeches from the first two nights of the Republican Convention, and the quote above is part of what the program returned. He then tried the same thing with the Democratic Convention. "In this case, though," he reports, "the summarizer software returned pure word salad--maybe because Democrats have more trouble staying on message than Republicans do, maybe because they just go on longer." (This anecdote comes from Nunberg's book The Way We Talk Now and is recounted later in his Talking Right.)

Palin is that summarizer software. At her worst, she speaks "word salad." At her best, she speaks at about the level of that last quote, a comfortable summation of stump-speech rhetoric. If this is the model of a rising political star in our age, we seriously ought to rethink our notions of what it takes to reach that position. All you need is the face of Tina Fey and the syntax of a Pentium, and you're good to go. Bill Gates's influence reaches yet new heights.
Posted by Kylopod at 11:18 PM No comments: